The Beauty of Today, the History of Yesterday

The Hall of Records is a little-known chamber behind the carvings at Mt. Rushmore National Memorial. It is mentioned in the movie National Treasure Book of Secrets. This area behind the faces is closed to the general public as is much of the upper area of the mountain.

Due to several comments and questions about this photo gallery, I'm adding the following information, written from memory and my own experiences at Mt. Rushmore. All of this is well documented in several good books (or in more recent news articles) you can read about the history of Mt. Rushmore, but in brief:

The trail to the top is too steep for the general public to use safely. It's like climbing a very steep, rocky mountain. Which of course it is! And now there are "security concerns" as another ostensible reason to severely limit access to this area. A few years ago Greenpeace managed to get up there and drape a banner over part of the carving. This embarrassed the Park Service and brought to light the fact that there were security issues on top of one of our nation's icons. These issues have now been addressed, from what I hear from people who are in a position to know.

Gutzon Borglum (the sculptor of Mt. Rushmore, circa 1927-1941) had a plan for a stairway to the top but like a lot of his plans this idea was abandoned (or probably in his mind, put aside for a while) to use what limited funds he had available to "finish" the faces first. And he died in 1941 right before WWII started, so again, the Hall of Records and the planned access to it remained unfinished at that time because of other priorities. A great plan but time (Borglum's life) and money ran out to complete it to the extent Borglum originally envisioned. His son, Lincoln, finished up the faces as we see them today, removed construction buildings/sheds from the top of the heads, etc. Gutzon Borglum had originally intended figures carved to the waist, another idea that had to be left on the drawing board. So Lincoln declared the project complete, in 1941. Rightfully so. It is a marvelous piece of grand sculpture as it is. I was privileged to visit the top on several occasions over the years as a member of the media on official tours. I thought that sharing these photos would be one way to show people what is up there.

I totally agree that it would be great for every visitor to have the opportunity to visit that area but it would be a logistical and legal nightmare for the Park Service to start doing so.
Read More 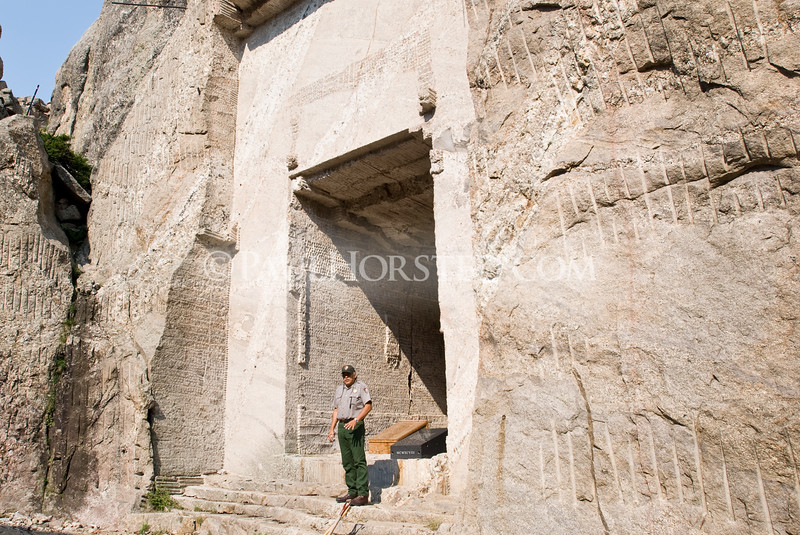 Mt. Rushmore National Memorial Superintendant Gerard Baker stands at the entrance to the Hall of Records in the canyon behind Mt. Rushmore, in the Black Hills of South Dakota.